Hide Search
You are here: Home / Blogs & Websites / Hostgator Is No Longer a Good Web Host 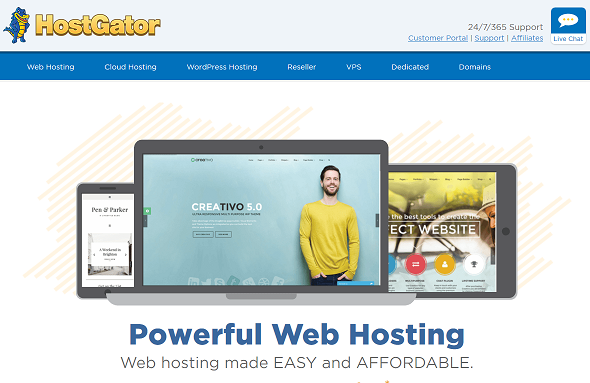 I haven’t hosted a website with Hostgator since around 2010 when I decided to move all my websites to Bluehost where I was also hosting a couple of websites.

Because of this, I’ve always stalled on writing a review of the web hosting service but I’ve always known what others were saying about it.

After getting an email from a marketer that I’m following where he ranted about the real time pain of hosting with Hostgator, I decided to use his experience to say what I’ve always wanted to say about Hostgator.

His experience is similar in ways to my incident with Bluehost that caused me to leave them.

It also reflects the general consensus on Hostgator’s web hosting service as of late.

Before I get into my review of Hostgator, a little on what they offer as a web hosting service.

Hostgator isn’t much different from a lot of the other web hosting services out there. They offer low cost web hosting that used to be really decent once upon a time.

They still offer low cost web hosting but things have changed in terms of the quality of service.

For customer support, you could create a ticket or try getting them on live chat for faster service.

If you’re just starting out with a website and need affordable web hosting then Hostgator might be an OK service to go with.

They have easy to use cPanel where you can manage your installs and you also get free credits towards advertising on Google Adwords and Bing.

If this was 10 years ago, I’d have filled this section with a lot of things I like about Hostgator but there is not much else that I can say they’re good at at this point.

Hostgator used to be a really good host that had great service, great customer support, stellar uptime and not a lot of problems that would cause you to want to contact them.

But then they got bought out by a company called Endurance International Group (EIG). This same company has bought out a lot of other web hosting companies including Bluehost.

After Hostgator got bought out, their services started to suffer. People have been noticing that EIG for some reason destroys the web hosting companies that they’re buying. Moving to another EIG-owned company makes absolutely no sense since you’re supporting the same parent company.

Being owned by EIG is the number one thing that I don’t like about Hostgator.

Because of this I don’t like what their services have become.

As I said at the beginning, I received an email from a marketer that I was following with the subject line: Real Time Example on Why To NEVER Use Hostgator. 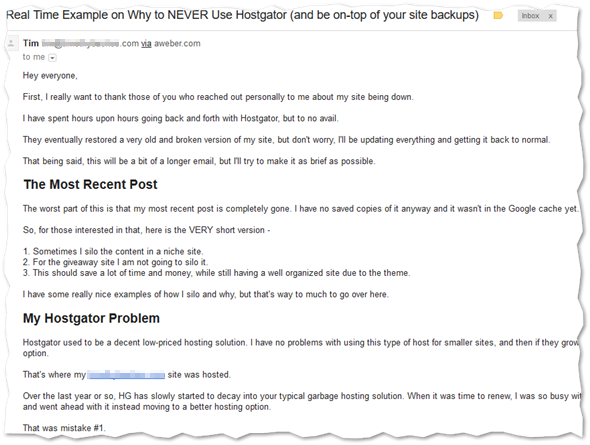 Tim used Hostgator to host his main website (not his money sites) and was using the site to update readers on a project he was doing. Someone noticed that the site was down and contacted him. He ended up spending hours trying to get his site back before they restored an older version of the website that didn’t even have his latest post.

“Hostgator used to be a decent low-priced hosting solution. I have no problems with using this type of host for smaller sites, and then if they grow, you can move them to a better option.

Over the last year or so, HG has slowly started to decay into your typical garbage hosting solution. When it was time to renew, I was so busy with other things I just got kind of lazy and went ahead with it instead moving to a better hosting option.”

If after 5 minutes you can tell you are basically talking to the wall, even when you get bumped to a supervisor, stop wasting your time.

I am now spending my time moving anything I still have left from HG elsewhere instead to running around in circles with their useless support staff.”

The moral of the story, he continued in the email was to “STAY AWAY FROM HOSTGATOR…FAR FAR AWAY!”

There are hundreds of web hosts to choose from and many of them will do a great job hosting your website. Everyone’s needs are different – you might want to start your first website, someone else might want to host a portfolio of WordPress websites – and there are different services that will cater for your needs.

The service that I recommend is coincidentally the same service Tim is now moving his website to – SiteGround.

SiteGround is a good non-EIG web host that offers very affordable services comparable to the prices Hostgator offered. Ever since I started doing internet marketing, they’ve always had a good reputation that they’ve upheld through the years.

They also have great uptime, fast servers and I haven’t seen any complaints about their customer service.

So if you’re looking for an alternative to Hostgator, I’d recommend that you go with SiteGround.

Would you like to share your experience with Hostgator or discuss their hosting services? Tell me what’s on your mind in the comments below.