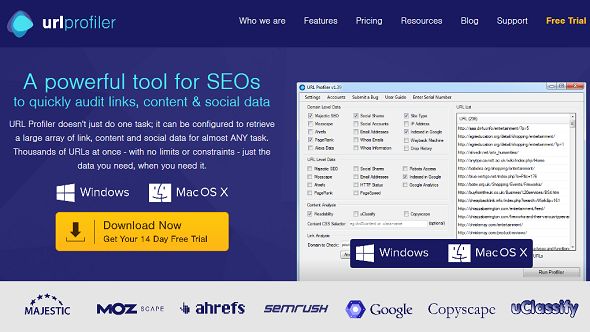 URL Profiler  is a tool for marketers who focus more on SEO. The tool has many uses but it can be described as a competitive research tool.

The URL Profiler website lists it’s many uses under it’s features section but digital marketing firm Koozai broke it down into 40 ways to use URL Profiler.

I didn’t see a lot of mention about a Black Friday deal from them last year, just that they gave someone an exclusive offer of to give 30% off with a coupon.

Hopefully, they’re running a Black Friday deal this year. In that case, you can find the info below.

My Thoughts on URL Profiler

I’ve always had an interest in SEO from the time I learned about it back in 2006 from a Brad Callen newsletter.

I had to learn the basics because it was how I decided I was going to generate traffic in order to earn money online as an alternative to PPC which is how I got started.

However, I’ve never been interested in using tools like URL Profiler to help with SEO and got even less interested after Google dropped their Penguin update.

I guess I get along just fine knowing the basics and not focusing too much on reverse engineering or manipulating search engine results. I don’t really care what my competition does. I just want to focus on producing content.

So my point really is that I won’t be taking advantage of something like URL Profiler this Black Friday but I know that the hardcore SEO guys love these kind of applications and this might be a sweet deal if you’ve always wanted to get URL Profiler.

Here are the details of their 2016 Black Friday deal again:

If you want to discuss URL Profiler, leave a review about the deal or ask questions about it, please get busy in the comments section below.