Hide Search
You are here: Home / AM Product Reviews / Should You Buy 3K Payday System? 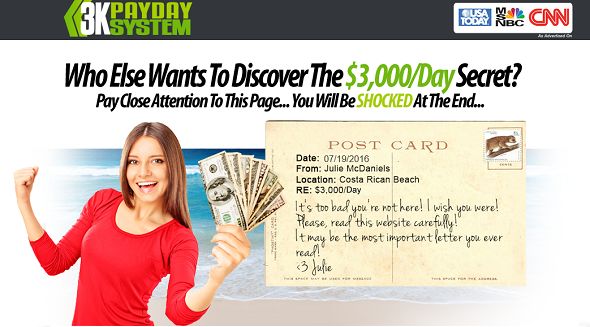 About a week ago while checking my email, I came across this page called 3K Payday System.

The page looked like one of those scammy promos to me so I decided to check it out to see if it warranted a review. I didn’t find much on Google and almost decided not to review it.

However, after checking out the domain name a bit, I found out that it was recently registered – July 8th 2016 – so it’s a new website that might become popular in the coming months.

Since I happened to be in the position to inform people about what they’re purchasing, I decided that I MUST do this review.

After submitting my email address to try out the system, I found out that 3K Payday System wasn’t even a product – it was just a funnel for another program which I decided to review before writing this article.

My first impressions about 3K Payday System as I landed on the page wasn’t good.

“Who Else Wants to Discover the $3000/Day Secret?” was the question being posed at the top of the page.

$3000 per day would be great but there isn’t an secret to making that kind of money online and you certainly won’t make it overnight. You won’t be quitting your job by this time next week.

Maybe Julie McDaniels knew something I didn’t? Highly unlikely and I did the research to back it up.

Picture of a beautiful young lady flashing hundred dollar bills next to a postcard sent from a tropical paradise. Media logos that imply the program has had coverage on television and other big websites like CNN and NBC. Computers spitting out money.

These are all the signs that tipped me off that this probably isn’t going to help anyone make money but instead is going to cause grief for some unsuspecting newbie.

Was I wrong? Well it seems that the system can make you money but I wouldn’t recommend it because it is too unethical and doesn’t really teach you any skills that you can use to make money without the system.

When I submitted my email address to try the system, I was taken to this secure page, an order form titled “Aspire” at the top.

This was confusing to me as there was no mention of this on the sales page of 3K Payday System. It looked like a totally different product. And it was.

I did some research and found that it was for a product called Digital Altitude by a Michael Force. Aspire was their core membership.

What confused me a little more were the emails from Julie McDaniels. They were all signed at the bottom from Michael Force. I didn’t understand until I researched Digital Altitude and Aspire.

They has a system where Digital Altitude did all the selling. This might sound appealing but you should read this article to see what I don’t really like their system and can’t recommend it.

To sum things up, 3K Payday System isn’t what it seems. You can make $3000 but there’s a huge catch involved. Too huge a catch for me to ever consider recommending this to anyone.

I don’t think that Julie McDaniels is her real name but she doesn’t seem to have a great reputation.

I did some research on her and it appears that she has released other products before where the sales page has the same postcard from 3K PayDay System. 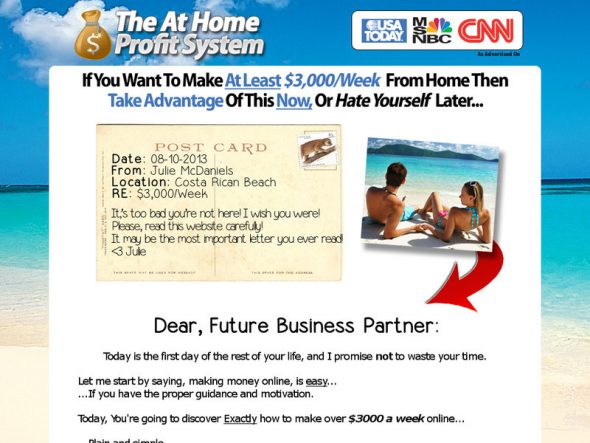 There’s “At Home Profit System” (pictured above) where she tries to get you to sign up for web hosting in what I call the free website scam.

You’ll notice that the wording for the site pictured above is almost an exact copy of what’s on the 3K Payday System page.

Julie McDaniels also had another program called the 7 Minute Paycheck which has been deemed to be a scam by many independent review sites online. This was because you had to pay $17 to be told to upgrade to some software that cost $19/month and to get access to a members area filled with affiliate recommendations which were also scams (some of which I’ve reviewed).

It’s been my observation that scammers rarely recommend anything legitimate to their readers so when I see Julie McDaniels recommending Digital Altitude, that says something.

If you have any experience with Julie McDaniels, 3K Payday System or Digital Altitude, please share in the comments below.