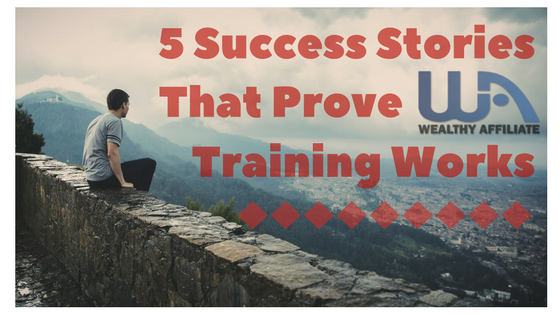 One of the biggest questions people have about Wealthy Affiliate is whether or not the training works.

Can you actually make money with Wealthy Affiliate? Are members earning money at all?

People regularly post about their successes at Wealthy Affiliate, whether they made their first dollar online, got their website on Google’s page 1 of results, quit their day job or had a major goal in earnings like their first $1000 month.

In this post, I’m sharing 5 such posts which goes to show that people are indeed making money with Wealthy Affiliate because of the training they’ve received.

Colton James joined Wealthy Affiliate in November 2014 and immediately went to work on the training.

He had a passion for computers and computer hardware so he knew exactly what he was going to make a website on. He joined Amazon and made his first sale of $2.35 as a complete newbie with only 4 posts on his website.

He kept working away and saw results that reflected his consistent input.

Fast forward to December 2015 – after making over $5000 the previous month he posted about his first $10,000 month as an Amazon affiliate. 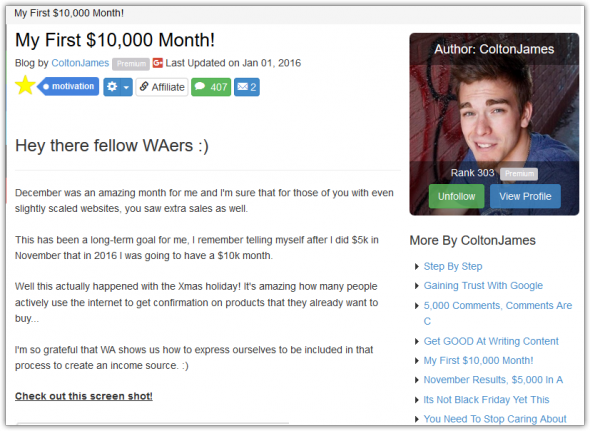 From $2.35 to $10, 000 in just 13 months! This goes to show that consistent effort and passionate writing pays off but it’s the training that provided him with the knowledge to work for those results.

James says this about how he was able to achieve his results:

“…you’ve got to put yourself to a point where almost 90% of people would call it quits for the day. Then once you get to that point you do even more.”

JohnMiguel from Sweden, joined Wealthy Affiliate in May 2015 and what didn’t make sense to him in the beginning turned out to be easy as he focused on taking action with the training. 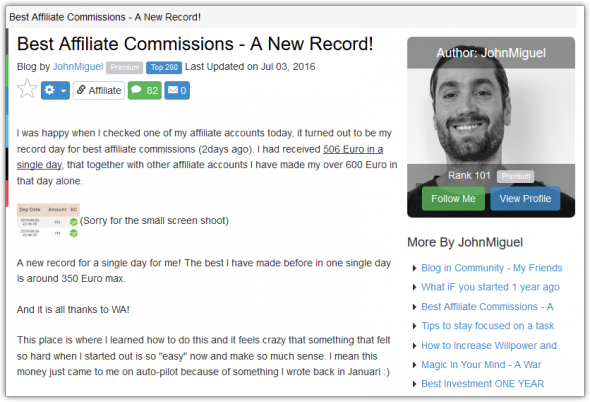 Roughly a year later he posted an awesome success story about his best day ever – his record day for earning affiliate commissions.

In 24 hours he had earned 506 Euro from one company and a total of about 600 Euro making it his best day ever. His previous record was 350 Euro.

If you’re now starting out you might want to listen to JohnMiguel and how he felt starting out.

“This place is where I learned how to do this and it feels crazy that something that felt so hard when I started out is so “easy” now and make so much sense. I mean this money just came to me on auto-pilot because of something I wrote back in January.

Vitaly joined Wealthy Affiliate in September 2007 – right about the time when things were beginning to happen for me. I remember chatting with him on MSN messenger and helping him with his diet website.

Back then the training wasn’t as great (or as simple) as it is today.

Vitaly has made lots of money with his diet site and decided to follow the Affiliate Bootcamp training to see how he would fare making a website to promote Wealthy Affiliate. 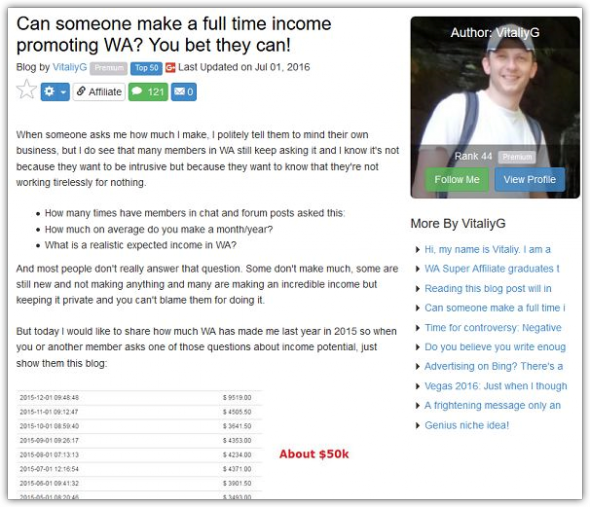 Vitaly has joined other top earning affiliates in Las Vegas for the annual Super Affiliate conference hosted by the owners Kyle and Carson.

His advice to you?

“Do the training. Be patient and work your butt off. It doesn’t come right away, but it will when you stop waiting and work.”

DougBeney hated writing. When he joined Wealthy Affiliate in 2014 at the age of 16, he knew he couldn’t do affiliate marketing without having to write so he learned to love it.

He looks forward to writing articles everyday now because he knows that they’d contribute to his success.

His last post reported that he made over $6000 in May. 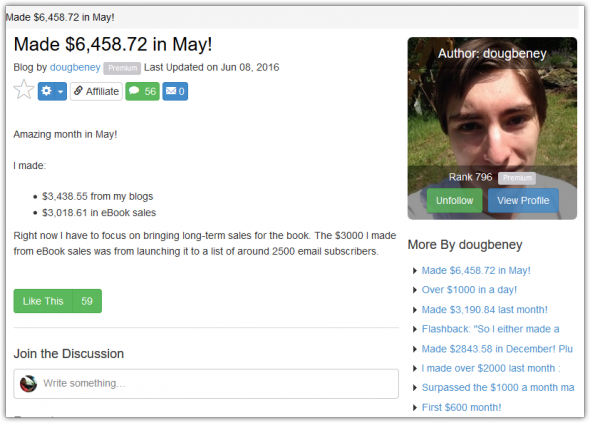 He’s 17 now and he isn’t thinking about college simply because he can teach himself the skills to be successful in life.

Reflecting on when he first joined Wealthy Affiliate Doug says:

Jesse (saco) joined Wealthy Affiliate in October 2014 and was a complete newbie knowing nothing at all about internet marketing.

He went through the training and made a goal of getting $1500 per month. He applied the training and the first 6 – 7 months were frustrating for him as his site was not getting any traffic. This is when some people end up quitting.

Jesse however held on and around the 7 month mark his rankings kicked in. He began seeing traffic and he made his first sale of $70. 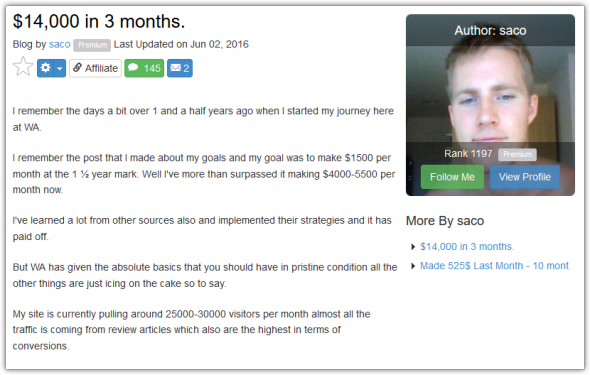 Jesse grew his site from no traffic to over 25000 – 30000 visitors per month. If he had quit just before the 7 month mark he would have never been able to post about his success .

Jesse added some encouragement for others at the end of his post.

“The point of this post is to show you that the things here teached work BUT it takes time and your own commitment.”

Please don’t use these success stories as a promise that you’ll have any of the same results. These results aren’t typical as everyone is different and success depends on a lot of factors.

The common thing about each person above is that they put in time and effort to write content and had the patience to continue when things were slow.

One thing that is constant though is that everyone receives the same exact training so the training definitely works and the above success stories are proof of that.

If you want to join these successes at Wealthy Affiliate, you can read my review and create a free Starter account to try the training.