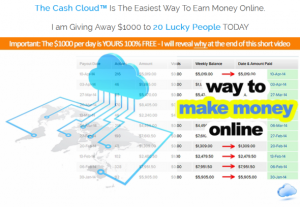 Automated Cash Cloud is a new offer where the creator is giving away what he calls “cash cloud websites” and making promises that you will make $1000 or more during the next 24 hours.

In the review of Automated Cash Cloud, I’m going to dispel some of the lies being told in the video and conclude that this is nothing more than a scam that should be avoided.

Hopefully, you’re reading this as part of the due diligence process before entering your credit card details. You just saved yourself some money and a bit of disappointment.

If not, please read this entire page because there are lots of scams just like this one (I call it the “free website” scam) that already exist and I’m pretty sure there will be more.

Here is a run down of the lies being told to sell you the “cash cloud” websites.

And it will all be done for you by his team.

If you’ve never made any money online and you’ve never even owned a website before, then this is not going to happen. It’s unrealistic and only appeals to the desires we all have.

It’s not going to happen especially where the only work you did was, as the creator of Automated Cash Cloud says, take 5 minutes to set up everything.

So $1000 per day for life from only 5 minutes input? Why didn’t this guy wait until he was a billionaire on the Forbes list to release this?

This guy only wants you to believe that there is some secret that people don’t know about that’s allowing him to make this kind of money daily.

I’ve been making money online for over 7 years now and I can tell you that everything in this video is BS and there is no secret.

So only 100 of these sites would be given away huh? And today is the last day?

This is another lie that is supposed to alert you of some kind of scarcity, giving you the feeling that you’re missing out on something.

The truth is that I saw this on Friday and that was supposed to be the last day. I’m sure that if you visit the site next week it’s still going to be up. Since you’re reading this now, take a look at the date I’m posting this review (April 20th) and draw your own conclusions.

You’re not missing out on anything because Automated Cash Cloud is a scam.

The spreadsheet is completely made up and there is no way to verify these claims.

Seriously looking at this list, it’s hard to believe that 100% of the participants made the target income. No one made $0? No one fell short of the target?

As I’ve said before, it is completely unrealistic for anyone to start something today and make this type of money in less than 24 hours. Making money online takes time, dedication and a lot more than 5 minutes.

So is it because his team is doing the work for you?

Highly unlikely. These guys are just trying to sell web hosting services as affiliates. There is no real system that you can set up in 5 minutes for someone and make this type of money no matter what magic system they tell you they discovered.

So the three countries that this wouldn’t work in are:

More than likely, you’re not from one of these countries so you’ll be breathing a sigh of relief that your country is not on the list. This is what the creators of Automated Cash Cloud want.

They thought about it and they just want you to let your guard done by making you feel lucky to be included.

The Irony of Misinformation

Another tactic he uses in the video to get you to trust him is to call out all the scammers for their shady tactics.

He says that “the only thing standing between you and making money right now is misinformation”. Then he proceeds to rant against the “BS products” and “sales videos with phony actors making false promises”.

Its funny because this one is just as bad as the ones he’s ranting against. There is probably 10 times more misinformation in this video alone than the last product launch I saw that had phony actors.

He says he makes all his money with his 5 click software suite that taps into “the Cash Cloud”.

There is no such thing as the cash cloud. It’s just a fancy made up name. It’s not “a new sensation sweeping the internet”.   Don’t be fooled by the quoted estimates and made up stats.

Let’s be realistic for a moment. Where is that $1000 coming really from?

There is no magical cloud where the money is going to simple appear from out of thin air.

The entire cash cloud premise is all a big lie to get you to part with your money.

Sounds Too Good To be True

He knows he’s going to scam you and that it sounds too good to be true so he wants you to trust him by tapping into your current emotions of skepticism.

He’s going to tell you why though. Probably in some way that sounds plausible although it confuses you.

I’m going to tell you why his methods aren’t going to work.

Right. If you don’t know about this technology then they can say anything that sounds like they know what they’re talking about and you’d be none the wiser.

The cloud exists – here’s an explanation.

The cash cloud though? That’s a fantasy.

So there is no cash cloud optimized website. They’re just going to build you a normal site like what everyone else has, host it on cloud hosting and give that to you.

Will you make money? You wouldn’t.

Check back tomorrow. It’s still going to be free.

This is another example of false scarcity and car-salesman type prodding to manipulate you into getting it TODAY. 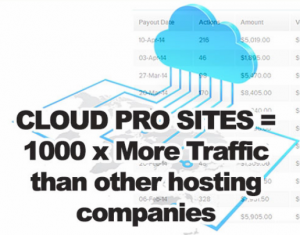 After you’ve entered your email and go on to video 2 there are more lies.

For example, he exposes the secret to why the system works. The secret as he says is the cloud hosting that he’s using to host your website.

Your hosting account cannot bring you traffic. It cannot make you money. They’re saying these things because you don’t know better.

Forget the stat that because his sites are hosted on cloud hosting that he gets 1000x more traffic that other hosts. It’s what you do to your website that is directly related to how much traffic you get, not which host you choose to host your website with.

It’s still a bad deal. You don’t need cloud hosting and it’s still way too expensive to start out with. Other hosts like the one I’m using go for $6.95 per month and even lower if you pre-pay for a year or more.

The Automated Cash Cloud setup with Cloud Pro Hosting goes for $14.95 per month and the 40% off is only applied if you pay for three years which is what they hope you do.

If he’s taking such a risk then it must be legit right? You have nothing to lose.

The truth is though, you’ll never get that $500 if you don’t make money – which is what is going to happen.

The Truth about Automated Cash Cloud

The people behind this had to come up with a clever way to get people to pay for the hosting so they came up with all the lies mentioned above as a unique angle.

You sign up to Cloud Pro Hosting, the Automated Cash Cloud team gets paid and you get a website as promised. Whether you make money or not is not important to them.

There claims are simply untrue because there is no workable system that is going to result in any monetary transactions being passed.

The process by which they partner with Cloud Pro Hosting to earn a percentage of the sales is called affiliate marketing and it’s a legitimate form of making money online.

The creators of Automated Cash Cloud are using affiliate marketing in an unethical way (by scamming people) but  it can be done in a way where it helps connect people with solutions to their needs.

I do affiliate marketing all the time and this is how I make a full time income online. I connect people searching for stuff online with what they’re really looking for and I earn a percentage of the sale if they end up buying something that I referred.

If you want to learn how to do affiliate marketing (the right way) then you should check out this training program. It’s the same one that I use and it’s free to get started and check out some lessons.

I want to hear about your experience with Automated Cash Cloud (if you have any) in the comment section below.