Hide Search
You are here: Home / AM Product Reviews / 7 Reasons To Avoid Clone My System 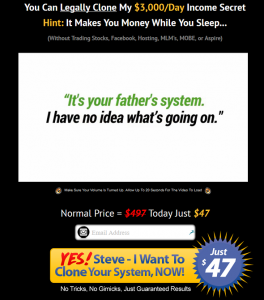 Yesterday, I posted a review of a new program called Clone My System.

It turned out that Clone My System wasn’t even a program that would cost you the advertised $47. It was a promotion for another program called My Mobile Money Pages.

I read a couple of other reviews about this and it appears that the reviewers were clueless about what the program really was.

In my review, I explain everything I know about the program and answered all the questions I think you’d ask if you came across Clone My System.

In this article though, I’m going to breakdown 7 reasons why I think you should avoid Clone My System at all cost.

Reason #1: It’s Steal My System With a New Name

A couple of years ago, there was a video for a system called, Steal My System by a guy who called himself Steve or Steven.

I was sent this video by Steven but now the system was by a guy called Justin.  However, the similarities were glaring.

Another thing was that Steal My System changed what the “system” was about 4 or 5 times even though the video referred to a specific system used to make millions by the guy who created it.

It was clear to me that Clone My System is Steal My System with a (not so) new name.

Steal My System didn’t go down well with me. I instantly spotted all the nasty red flags and warned people against it. That post was very popular on my website and people emailed me asking me for refunds and even threatening legal action.

For me, it confirmed that I was definitely right about Steal My System and I was right to warn people.

Reason #2: Video Is Vague About What is Involved

One way to avoid scams online is to never join programs that sell you on a dream instead of telling you what is involved in the program.

This is a common technique scammers use to distract people by directly aligning their message with the victim’s dreams and goals. Sell them on the dream and not what it would take to get there.

There is plenty of this in the video for Clone My System but not enough information on what you’d be getting once you hit the buy button.

Sure, they mention that you can set up the system once and then just let it run in the background and you’ll make money.

Too easy and too good to be true. No such system exists and even if it did, how would it work?

Again, nothing is mentioned about how you’d make money, just that you can make $3000 every single day with this system. That’s not enough information to go on if you want my $47.

Here’s how the system worked for Justin when he first set it up.

The result – thousands of dollars within the next 24 hours!

Now, I could use one of these machines because, who wants to write content for a website everyday? Who wants to look for niches and do keyword research and set up websites and collect emails and…

Unfortunately these machines do not exist and the reality is that if you want to make life-changing income online, you have to work for it.

Anyone who tells you that you can make thousands of dollars online with just 5 minutes of work or they’ll do the work for you is lying and the only ones who will be making money is the scammer.

Bottom line, big money, whether offline or on the internet, takes effort. You have to put in the work.

Reason #4: The System is Subject to Change

If Justin (or Steve) were being totally honest, then the system being sold here should have been the one his father used to make millions, the one you just had to turn on and run in the background.

It should have been available for order by clicking on the order button.

Instead, you’re sent to an external website to try a system that has been online since 2011, one which many have tried before and failed to make money with. 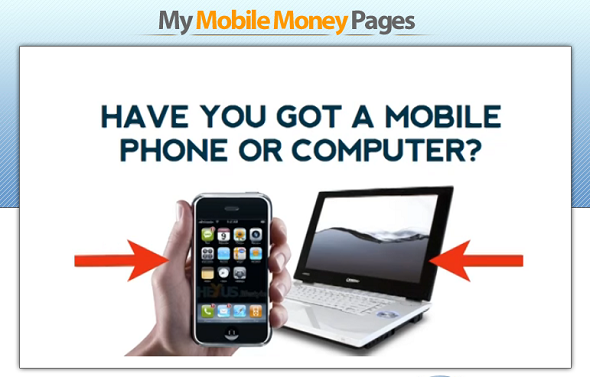 The system mentioned in the video cannot be any number of available programs. It’s supposed to be a unique, standalone program as described.

What will they promote next? I have no idea but if you’re reading this sometime in the future and you’re confused by my mention of My Mobile Money Pages, then they’ve probably changed the referred program.

As I mentioned, My Mobile Money Pages, the initial system being referred to from Clone My System isn’t any good.

It has consistently bad reviews and from what I’ve observed, scammers rarely recommend any legit programs.

My Mobile Money Pages is outdated and so is the training and it’s tough to get support. With all these issues plaguing this program, you’d be lucky to even make back the money you paid to get it.

If you buy into this, you’re going to be very disappointed and you’re going to want your money back. Just don’t ask me because, I didn’t recommend Clone My System or My Mobile Money Pages to you.

Like a bad movie, there are just too many contradictions and plot holes in the story presented by “Justin” from Clone My System. Too many red flags to even want to try this.

Maybe you’re thinking it, which is why you ended up here reading this. I’ll just confirm it for you – Clone My System is a scam and should be avoided – plain and simple.

The presenters say one thing in their video, making absurd promises and telling a bunch of lies and hope to fool you into purchasing their system because you really want to make big money online.

There are no systems online that you can just set up in minutes, run it in the background and make thousands per day.

That would be great and everyone would be using it. However, there are better systems that are built on honesty and integrity that can teach you how to make money online.

Like anything else that you have no experience with, you will to learn the process and then apply that knowledge to build your business.

There are lots of programs that will teach you the correct way to do this and there are some that even provide all the tools. There are only a few that I actually recommend.

My personal favorite and the one that I use is Wealthy Affiliate because it was designed with total beginners in mind. In addition to step by step, task based training, video training and a very active community, they also have all the tools including web hosting available for you to build an online business and succeed while doing it.

The best part is that Wealthy Affiliate is free to access but you can get the most benefit by unlocking all the training and tools with a premium account.

All of these are lacking from Clone My System and My Mobile Money Pages which is why it would be best to just avoid this scam system.

You can read my original Clone My System review here and if you want to learn how to really make money online, check out my Wealthy Affiliate review here.