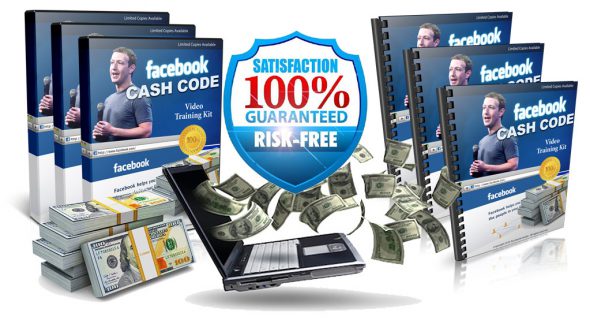 If you’ve seen the promo for Facebook Cash Code, then I’m sure that you’re asking yourself this question. Or if you’re like me, you’ve already guessed that this has to be some sort of scam.

In the following review of Facebook Cash Code, you’ll see the facts about this program and why I call this a big scam that you should stay away from.

Facebook Cash Code is, from the way the creator of the site describes it, a work at home opportunity that allows you to get paid for posting links to Facebook.

The video on the page alleges that Mark Zuckerberg and Bill Gates, the founder of Microsoft both teamed up to create this program.

You only need a computer, tablet or smartphone with internet connection for this to work. The only skills required are knowing how to use a computer and how to browse the internet.

There are only three simple steps:

It would seem that the opportunity is available in your area for a limited time and you only need to pay a small fee that covers shipping and handling of the Facebook Cash Code kit.

There are numerous earnings screenshots that are supposed to prove that people are making lots of money already and you can make as much as $14,000 per month just working 1-2 hours per day. 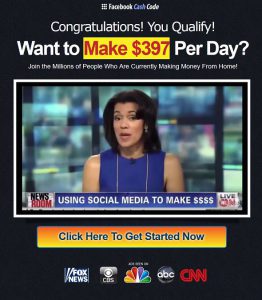 There are too many red flags popping up on the page for Facebook Cash Code to accept this as legit. But not everyone has 10 years experience analyzing internet scams so not everyone is going to see them.

I was introduced to Facebook Cash Code via Secret Money System which is a program I wrote about close to a year ago. At the time their “secret system” was an entirely different program.

The creator behind Secret Money System is a scammer and from my experience, scammers rarely recommend anything legit so I knew what to expect when I clicked onto the Facebook Cash Code page.

When the first thing I saw was some obscure website with a news story (it’s called an advertorial), I knew that this wasn’t something good and needed a review to warn people.

Advertorials are usually made to look like legit news stories but they are unethical sales pages. There’s actually some fine print at the bottom of the site that basically says “don’t believe anything you read here”.

Think about it for a minute. I’m sure that you have a Facebook account. If Facebook really offered work from home jobs, wouldn’t they just announce it on their site? Wouldn’t it be all over the news?

The truth is that there is no Facebook work from home program and the whole Mark Zuckerberg/Bill Gates story is completely made up.

In such a case, you have to wonder about the legality of using celebrity names and even Facebook and it’s images in such a manner. Someone seems to be asking for a lawsuit or government agency to come looking for them. 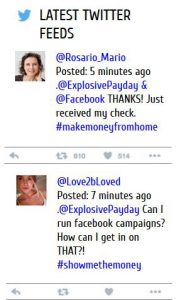 I noticed to that the feed image shows everyone mentioning Explosive Payday when they should be mentioning this program instead.

I checked out Explosive Payday and it seems as if this is an older version of the same exact thing being offered here. They just put a new spin on an old scam.

What about Martin J. Peters?

There’s a testimonial on the page of a guy named Martin J. Peters who apparently makes $14,000/month posting links.

The picture is actually a stock photo that was edited to include the Thank You Facebook Cash Code note. Anyone can buy this photo and do whatever they please with it.

This leads me to think that this isn’t working for anyone otherwise they would have used a legitimate testimonial from an actual user. Obviously the reason for this is because its a scam.

Available Where you Live

I haven’t heard of this where I live, a small island in the Caribbean with a population of less than 150,000. However, the page says that positions are available in Kingstown, the capital city for ten of thousands.

They’re using a geo-tracking script that pulls up your location and displays it based on your IP address. Right now it says, Kingstown but someone in Miami, for example, will see Miami.

Another thing worth mentioning that is a classic red flag for scams is the way they say that Facebook is hiring work from home positions. Then they ask for money, which is supposed to give you a kit and cover shipping, handling and enrollment.

The page mentions that the fee is small but the quoted fee on the website is actually $47 discounted from $197. This is not such a small fee.

Who pays for a job? This is more like a business opportunity than people filling positions to work for Facebook.

Watch Out for Those Charges

Here’s the scariest thing about Facebook Cash Code that I found though and something I’m sure people are going to complain about if they already went ahead and ordered.

Remember that small fee that’s supposed to cover shipping and handling? Well it’s actually $47 as I pointed out above and it’s supposed to be a one time fee.

Well on the order page, I found something else – the $47 that you’re paying now is really for a trial and after 30 days you’re going to be charged $69.95 every month from then on until you cancel.

“This product is 100% Risk-Free to try! Enroll today and your card will be charged $47. You will then be given a 30 day trial period from your authorization date, at the end of this period unless you cancel your trial, you will be charged $69.95 every month until cancelled to the card you signed up with. You may cancel at any time and have a 90 day money back guarantee!In addition you will get a 10 day free access to the success road academy training, After 10 days, if you do not cancel your membership with the success road academy, we will charge you $1 per month until you cancel, You may cancel at anytime and have a 90 day money back guarantee!.”

Wow! That is downright criminal as there is no mention of those charges or any mention of a trial anywhere else on the site. This is what I call a scam.

Link posting scams has been around for as long as I’ve been making money online.

The basis behind the posting links scam is actually a legitimate way to make money online called affiliate marketing but it’s just referred to as “posting links” to make it appear simple.

It is not as simple as the link posting scams would make it out to be as there is a bit of work involved but it is much simpler than running an actual brick and mortar business.

This is the business model that allows me to work from home full time and get paid on a regular basis.

Theoretically, you can post affiliate links to Facebook and make money but it would be tough to make a substantial income just working 1-2 hours a day.

There’s a better way and you can learn how to do it without having to get ripped off by scammers.

Learning about affiliate marketing can benefit you in a lot of ways. It’s important that you learn the correct way where you can have all the tools and support channels available.

Since 2007, I’ve been using this website called Wealthy Affiliate that has evolved to the point where everything that you need to be successful with affiliate marketing is available in that one place.

You can read my complete review about Wealthy Affiliate here.

As you can see Facebook Cash Code offers nothing useful – just lies and lots of charges to your credit card. Wealthy Affiliate on the other hand will help you to create an income by offering you everything you need to succeed.

Have you had any experience with Facebook Cash Code? Your comments are welcomed below.