Hide Search
You are here: Home / Affiliate Marketing / How Watching TV Can Get Your Website More Traffic 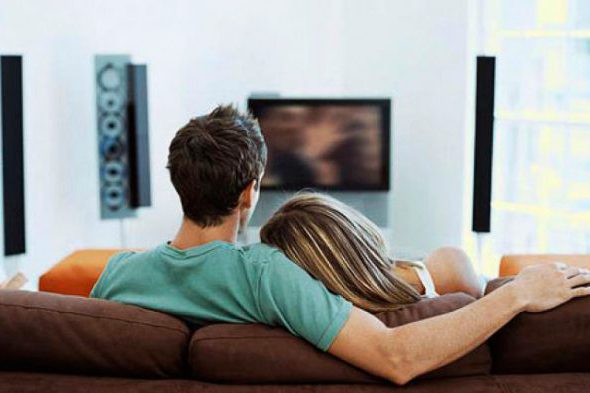 One of the things affiliate marketers worry about is growing the traffic to their websites.

There are plenty of ways to do this including writing more keyword-focused articles, adding a Facebook ad campaign or posting videos to YouTube just to name a few.

Or how about just watching some TV instead?

No, I’m not crazy and I’m not suggesting that you put your business on hold or procrastinate so that you can binge-watch episodes of Game of Thrones.

Never mind what productivity experts say. You can watch television and still build your business if you know what to look for and how to apply it.

In this article, I’m going to show you how to make money watching TV by using it to increase your website traffic.

The Truth About TV

Advertisers pay big money for ad placement on TV because they can get their products in front of hundreds of thousands to millions of viewers which can in turn give them good returns in terms of brand awareness, internet and in-store traffic and sales.

According to Adage.com, here are some examples of what advertisers are spending:

A spot on a local television station may cost you anywhere from $200 to $1500 per airing.

Television advertising isn’t cheap but it sure gets noticed because people are watching. A lot of internet traffic originates from people who saw something on television and want to learn more.

The average affiliate marketer probably isn’t going to have the budget to afford the kind of numbers mentioned above but you can definitely benefit from the search traffic generated by these ads.

I’ve done it before many times and there are lots of opportunities daily for you to do it yourself.

And it’s not just the ads. Think about all those late night infomercials, news stories about recalls, or Dr. Oz mentioning some new superfood or diet on his show.

These are just a few examples of how television can influence internet searches and the good thing is that the searchers might just be a part of the niche you’re trying to help.

How You Can Benefit From Watching TV

So I think you already realized by now that you can benefit from watching television. I don’t think I’d have to convince you more.

There are a number of ways you can benefit from sitting on the couch with your favorite snack watching the game or that series you’re into.

Here are some of them.

If you’re new to affiliate marketing and you’re having trouble finding a niche, then this is one option you can use. Advertisers are trying to reach their niche audience. Try to figure out who they’re trying to reach and you’ll have lots of ideas.

For example, each late-night infomercial is a solution to a problem that someone is having.

You don’t have to promote these products but you should know that these are all profitable niches if advertisers are spending big money to get in front of people. Some of these infomercial products might also have affiliate programs so they might be worth promoting as well.

You might have already found your niche and have an existing blog or website where you cater to a specific audience. If this is the case, keep an eye out for content ideas.

These are just a couple of ways in which you can get content ideas for your existing blog or website just by watching TV.

(3) Spot rising trends and incorporate them into your blog

A report dubbed #TVisSocial by the Video Advertising Bureau (VAB) which aimed to show “how live TV sparks continuous online conversations” found that during primetime, 87% of the trending topics on Twitter were driven by TV. 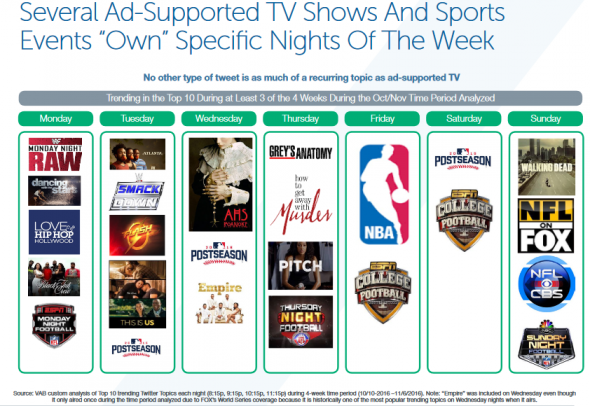 It could be tough relating some of these shows to what you blog about but I’ve seen people ingeniously connect seemingly unrelated topics that actually made sense.

Other times the topic might be right up your alley and writing about it on your website could put you right in the middle of the conversation which could lead to traffic from social media (if you participate) and from search engines.

If you run a website in the dancing niche, then Dancing With the Stars would definitely be a must watch on Monday nights.

Depending on your niche you might be able to find a channel that’s niche-focused – one that someone you’re targeting would be likely to watch.

Here are some examples:

You should find plenty of ideas for content by watching channels that are targeted to your niche market. Even if you can’t find one, just watch what you normally watch, for leisure, and something should pop up anyway.

How I Used TV Traffic to Make Money

I don’t watch a lot of ad-supported TV anymore. I have one of those streaming boxes (Roku 2) that I use mainly for Netflix.

Still I can check out Google Hot Trends and see which topics are being fueled by television viewing.

But when I did watch TV, I picked up on these things fast and made lots of money… fast. I’m going to give you a few examples.

I was casually browsing through channels one night when I came across the following infomercial:

It was certainly interesting not just because of the gorgeous hosts but because it was a topic that I was interested involved in – making money from home. At the time I was promoting Wealthy Affiliate and I saw an opportunity.

The infomercial was making all sorts of outrageous claims, so I decided that I had to say something for all the people that would be watching and didn’t know better.

I wrote a review and posted it to a site called Hubpages because it would rank fast and higher in the search engines. Sure enough, the article, which took a couple of hours to write, got indexed on Google minutes after it was posted and ranked on the first page.

I started getting traffic and immediately started seeing an increase of clicks to my affiliate link. When the infomercial aired, I would get thousands, sometimes tens of thousands of visits and multiple sales each day. I would still get a steady stream of traffic when it wasn’t airing and sales to Wealthy Affiliate.

You know those CD compilations they advertise on TV with all those great songs you know? Buzz Cuts was one of them and this particular ad showed up on Google Hot Trends one night as the number one trending search.

I had to check it out and noticed that the company selling the CD had an affiliate program. This was a CD that cost maybe about $14 (can’t remember) and the affiliate commission was maybe about $2.

It wasn’t a lot of work to put up an article about a CD so I went ahead and gave searchers the full track listing and some supplementary info about some of the songs and artists featureove the vendor’s site and I got tens of thousands of visits and lots of sales.

For a CD that paid $2 in commissions, I made around $1300 from this one article over the course of about 8 months.

These are two diet programs that had commercials air on TV that showed up on Google Hot Trends.

I had put together a diet program review website and were reviewing diets from Clickbank before I heard about these two programs. I was averaging just about $100 per day with this site promoting a program called Fat Loss 4 Idiots before adding reviews for Skinny Switch and Food Lovers Fat Loss.

After adding the programs, my website traffic went through the roof and my income from this particular website averaged around $400 per day.

There are other examples like when I wrote and article on the Hydro 4000 based on an investigative news report that wanted to see if they could use the device to “make their news van run on water”. The device cost $1200 so I just told people that they could make one from plans being sold online that cost about $40. I made $1500 the first day promoting these plans but deleted the campaign after someone said they didn’t work and I was scamming people. Of the 80 or so units I sold I only got 2 or 3 refunds.

Kyle and Carson (owners of Wealthy Affiliate) had a case study where they made thousands per minute during the 2006 FIFA World Cup Soccer where they promoted a program that allowed people to watch the games on their computers. They made 10’s of thousands of dollars whenever a game was on because people wanted a way to watch from their computers.

Here’s What To Do

If you want to increase your website traffic and make money by watching TV, here’s what you should do.

You can check sites that track trends such as Google Hot Trends, see what’s buzzing on Facebook, Google+ and Twitter, and check news and magazine sites to see if they’re mentioning anything related to TV.

Pay special attention to live shows where things can happen unexpectedly. Online conversations and searches go up whenever there’s a live event.

If you jump on some fire trend early, you might just put yourself in the position to get server busting traffic and sales that will make your affiliate manager take notice.

Your next step after uncovering a hot trend would be to take action.

Online searches can originate from TV viewing and the traffic that can come from some of these searches can be substantial enough to register as trending searches.

Putting yourself in front of these searches can be quite beneficial in terms of increase activity on your website as well as sales. The next time you’re watching TV, look at it a little differently. It might just be the things your business needs.