Hide Search
You are here: Home / AM Product Reviews / Is $1000 Per Day Possible With Fast Earners Club? 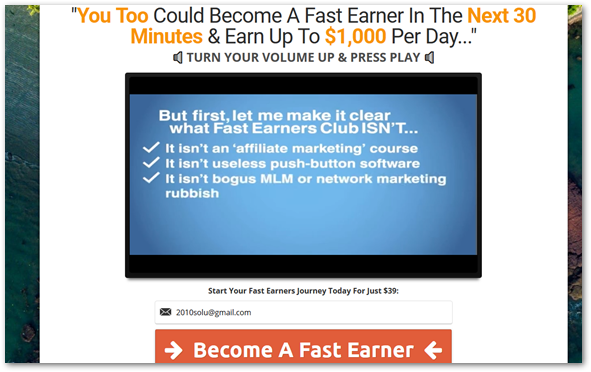 What would happen if a stranger walked up to you and showed you a box?

And in that box they explained that it contained the answers to all your financial troubles. Except, you cannot see what’s in the box until you paid them $39. Would you give them the money?

This is kind of how Fast Earners Club works and in this review, you’ll see why this is most likely a scam and not something you can use to actually make money online.

What Is Fast Earners Club?

Fast Earners Club is a mystery from watching the short presentation.

It starts off with three people giving their separate testimonials of the program, each praising the club for money that they apparently made using the program.

One guy says that it’s “the only legit way to make money online” which to me is a huge joke. I was more shocked than amused though.

The presenter takes over with a pretty generic and widely used script before describing what Fast Earners Club isn’t.

What we know about Fast Earners Club up to this point is that its:

This is as much as they tell you about Fast Earners Club.

The presenter boasts about how some lady who tried the program made $53.33 in just 23 minutes and $107 in just an hour.

According to her there are only two steps involved:

Even after knowing the steps you have to take to make money, you still aren’t told what’s involved.

Would you buy something if you don’t know what it is and how it works?

What’s actually contained in the members area after you pay the $39 are 4 PDF ebooks:

Why You Should Skip Fast Earners Club

I’ve been scammed many times before and in the 10+ years that I’ve been online, I’ve learned to see the signs and have a few rules to avoid getting burned.

One rule that I stick by is that I refuse to buy something if the website doesn’t tell you what’s involved. A lot of scams do this.

They sell you on the dream of being able to click a few buttons and you’ll automatically be making money faster than you can click the back button.

Then you give them your hard earned money and you’re immediately disappointed when you see what is involved.

I did not purchase Fast Earners Club because to me, no legitimate business would shroud their product in mystery while they’re selling it.

Even the last product I reviewed, Viral Cash App, lets you know that you’re getting a system where you can build viral web pages and I didn’t recommend it.

What about the people who claimed they made money with it? 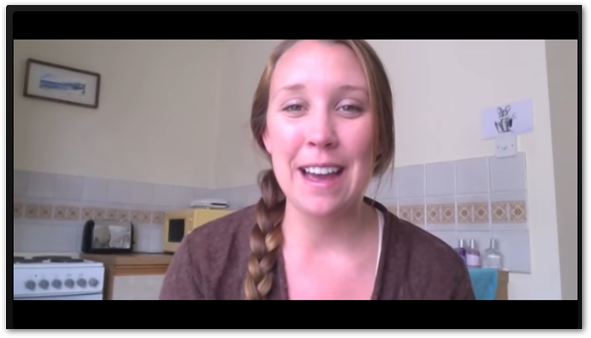 Those people in the video were actually paid to say good things about Fast Earners Club and they’ve probably never made money using the program. You can find these people on micro-gig sites like Fiverr where you pay a small fee (starting from $5) for a short video praising your product.

This is a common technique that scammers use to make their product sound as if it is working for people.

If people are actually making money with your product, why not ask those people to send in video testimonials instead?

But there’s a 60 day refund guarantee.

This is true and if you did buy the product then you could always contact their payment processor and get a refund.

But I’ll tell you something. This is just hogwash that they’ve included to get your trust and to get you to signup.

A lot of people who do signup, try the program for a while (sometimes for longer than the 60 day period) while some simple take a loss and forget about the program.

Others try contacting the seller for a refund and their messages will usually go unanswered because the seller doesn’t want to give you back your money when the correct way to get a refund would be to contact the payment processor.

Clickbank in this case is the payment processor and you can always contact them and get a refund within 48 hours of your request.

Something tells me that this particular program would have a very high refund rate.

In my opinion, I’d say that Fast Earners Club is a scam because they don’t tell you what you’re getting, yet when you press the “Become a Fast Earner” button right below the video, you’re taken straight to the checkout page where you’re asked to pay $39.

Furthermore, the 4 ebooks in the members area are not going to earn you money fast. They claim its a done for you system, which it isn’t so this is pretty much a scam at this point.

I will not recommend that anyone try this program because you simply do not know what you’re getting if you were to just go by the sales video presentation.

There are thousands of programs online that tell you what is involved and you could easily try one of those instead.

There are also lots of programs online that teach any of the topics in the members area and do it much better than providing just an ebook.

How to Earn Money Online Without Getting Scammed

If you’re looking to make money online, you need a proven program.

The one that I use doesn’t hide anything. In fact, you can join for free, try out the program for as long as you like and then upgrade when you’re ready to take full advantage of all the premium tools.

The program primarily teaches affiliate marketing and has a community of honest, hard working individuals that help each other achieve success.

Their are no promises of fast income here, because it doesn’t work like that. Instead you learn how to build a business that provides sure and steady income over time.

I 100% vouch for this program and I’ve been a member there for over 10 years. It just work.

If you’re reading this review and want to add something, maybe even your experience after trying it, hit the comments below and let others know what you’re thinking. You just might help someone avoid making a mistake.