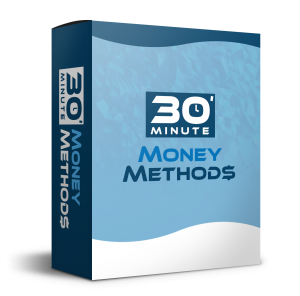 Shelly West is making a bold promise in the video for her new make money online program 30 Minute Money Methods.

She claims that once you try her secret methods, you are guaranteed to make $50,000 per month just like she did.

She is promising that with just 30 minutes work, you will make hundreds of dollars the same day and every day after that on autopilot.

This is a very bold promise and if it is true, I’m very sure that you would be interested in trying 30 Minute Money Methods.

Well, just like all the other programs with bold money claims, I decided that I wanted to check this out to see if it was legit with the hopes that I could help others who are questioning the legitimacy of this program.

I did all the research for you so you won’t have to waste your time or your money. 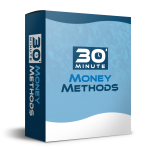 Name: 30 Minute Money Methods
Website: www.30minutemoneymethods.com
Creator: “Shelly West”
Years Online: Since October 2017
Verdict: Not recommended due to misleading sales page filled with lies and low quality training with not so secret methods in the members area. You won’t make the type of money promised by Shelly West if you follow these methods without getting more information.

On landing on the sales page for 30 Minute Money Methods, my first reaction was “here we go again”.

I’ve seen this type of layout more times than I would like to admit and I instantly had a bad feeling about it.

It looked to me like I was being presented with yet another scam product. After watching the video which took maybe a half hour and interacting with the page, I encountered a number of red flags that helped me decided that this product was not going to do anyone any good.

There were too many lies and manipulative tricks being presented to anyone viewing this page.

Below you will find some of the red flags I came across which you might not even realize were there.

(1) Earnings Ticker – The first one I’d like to point out is the member earnings ticker running across the bottom of the video. In the ticker, several members are mentioned as having just earned hundreds or thousands of dollars with the program.

On the surface this is great to know that people are earning money with the program but how would they know that unless these people are sharing those earnings in real time. The members area of 30 Minute Money Methods does not have a place where members can share this info.

These earnings are merely made up stats presented to trick the viewer into thinking that this program really works if others are making such earnings.

(2) Comments – Just below the ticker, there is a cleverly placed comment section filled with questions about the program and positive comments.

As a student of internet marketing, I know that sales pages wouldn’t usually have a comment section because it encourages users to have a choice of action. Discuss the program instead of buying it.

Not surprisingly, the comment section is a fake one where as soon as you try to submit a comment of your own, instead of posting your comment, you’re whisked off to the order page to pay $37.

The optin form itself just under the video leads right to the order page as well which means that the video should tell you everything you need to know about how you’re going to make money with this program.

(3) Fake testimonials – Throughout the video there are a number of recorded videos of people talking about how they’ve made thousands of dollars with 30 Minute Money Methods with very little effort.

Great. But only if they were telling the truth.

I had a hunch about this and after looking into it, I was right. The people in the testimonials were paid to read a script about how they made a lot of money following Shelly’s methods.

Here are a couple of examples.

This is the first guy in the video speaking very highly about Shelly’s program. 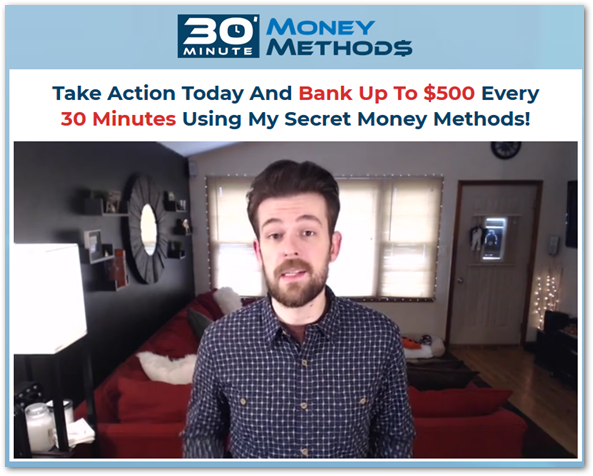 It took me no more than a couple of minutes to find him on a website called Fiverr, where you can pay people to do this kind of things for a fee. Here’s the profile of Kyle Brauch who you can pay between $5 – $25 to be a spokesperson for your program. 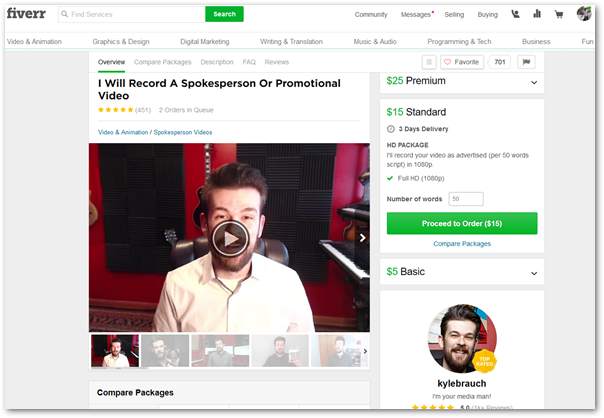 In other words, that guy didn’t really make all the money he said he did using 30 Minute Money Methods. He was just paid to say he did.

Here’s another one near the end of the video. 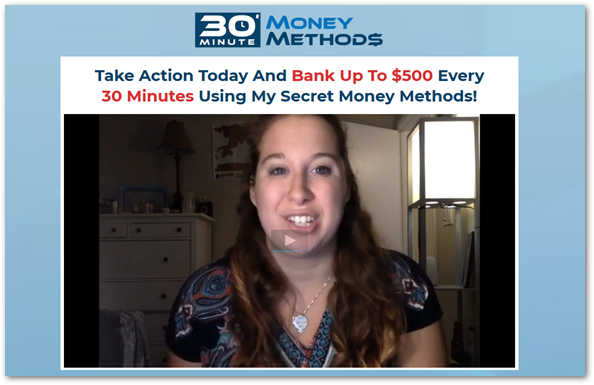 She was very enthusiastic about Shelly’s program but I found her also on Fiverr where she sells services similar to Kyle. Melissa Raub charges between $25 – $100 for a testimonial like the one Shelly paid for. 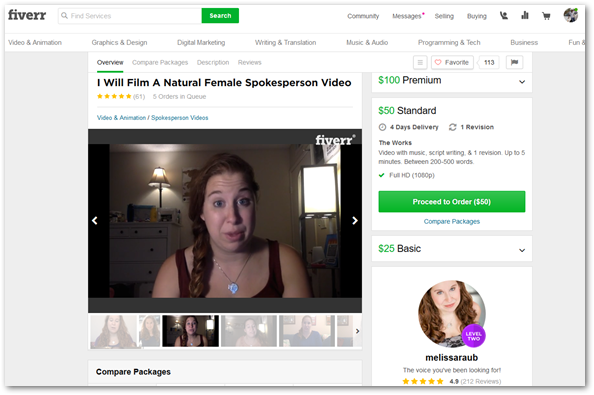 Just based on this alone, I would not buy the program. If people are really making big money with this program then there would be no need for Shelly to pay people to say they are.

It seems that the only person making money from 30 Minute Money Methods is Shelly West.

(4) Shelly West – Speaking of Shelly West, I’m positive that the name is made up and it’s not really the name of the person who created this program. While there is really nothing wrong with using a pseudonym (authors do it all the time), it’s too common of a technique used by scammers, to hide behind a name so they could release scam after scam without people knowing about the others.

Sure, Shelly West has a story but that story is just that – a story created by the real person behind the program so that others can relate to her situation.

Though not impossible, it is highly unrealistic and considering that Shelly is lying about all the other stuff, I’m going to say that these earnings claims are also lies. Shelly doesn’t actually exist so think about that too.

Something we could both agree on though is that online surveys are a waste of time.

The video fails to mention what is involved with 30 Minute Money Methods but instead tries to sell you solely on hype and promises.

They expect $37 without telling you how you’ll be making money. If you decide to close the page, you’ll be presented with a $10 discount, essentially letting you get the program for only $27.

Inside the program is very disappointing. The methods, as expected are not very secret at all.

The training is also disappointing with not much time put into explaining fully how to do the methods. It’s just a brief overview about the methods contained in PDF format. You would be very lucky making any money at all using this training.

Shelly also uses affiliate links to recommend stuff like web hosting in the members area which is another way to squeeze money out of her customers and line her own pockets.

Here is a breakdown of some of the not so secret methods in the members area.

All of these methods can make you money but don’t expect to just put in 30 minutes of work and make a lot of money the same day. Also don’t think that you can make huge money with these on autopilot as Shelly claims.

These methods can work for you if you have step by step instructions and support where you can ask questions – two things that are lacking in Shelly’s training.

My Verdict on 30 Minute Money Methods

My verdict is to avoid 30 Minute Money Methods.

With a sales video filled with hype and lies, it is clear that someone cares more about helping themselves instead of helping others. YOU are not going to get anything out of this besides the feeling you get when you realize you’ve fallen for yet another scam.

The members area could have been much better but instead it does not have enough quality training or a support system to make you successful using any of the methods mentioned.

One thing is inevitable if you decide to really put in work with this program. You are going to fail.

There are more complete programs that you can use to make money with each of these methods and you should probably consider those instead of trying 30 Minute Money Methods.

One such program that teaches how to make money being the middleman (I mention this because this is actually what I do to make money online) is a program called Wealthy Affiliate (see my review here).

Wealthy Affiliate has everything it takes to make money with this method contained inside their members area. All the training, all the resources and all the support you’ll need.

Just to put things into perspective, below is a comparison table of Wealthy Affiliate and 30 Minute Money Methods to see how they stack up side by side.

As you can see, 30 Minute Money Methods isn’t really that helpful.

Wealthy Affiliate isn’t going to hype you on promises but instead they provide the opportunity to build up a consistent income over time. You can make as much as you like but it wouldn’t happen overnight. Or in 30 minutes.

What are your personal thoughts on 30 Minute Money Methods? Have you tried the program? Let me know in the comments below.