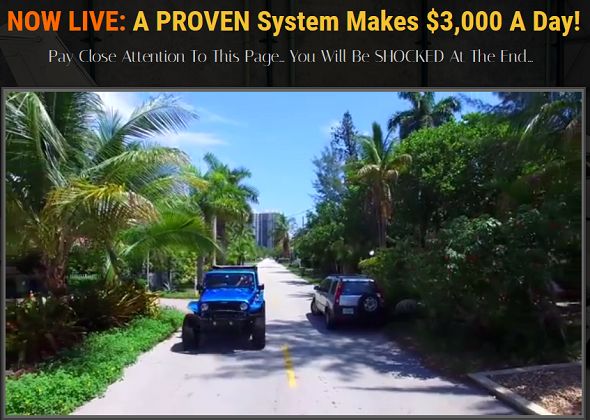 I was looking through some JV digest emails and came across Easy Clone System, a “system” that was launched by Alan Magliocca during the last week of October.

Well I checked out the sales page for Easy Clone System, I had no clue what to expect. I didn’t know what this system was about.

Turns out that I had already come across this system but it had another name.

The clues in the video didn’t really hit me until I clicked on the big “get started today” button under the video.

The headline for the Easy Clone System reads “A Proven System Makes $3000 a Day”.

About 3 months ago, I wrote about the 3K Payday System by Julie McDaniels. She wanted to know if you wanted to “discover the $3000/day secret”. Her system was just a front for another program.

The guy in the video (not Alan Magliocca) also hinted that:

For him, it was also more important to sell a lifestyle instead of inform you about what the actual business entailed. Beaches, fast cars, jets and so on were the images constantly being put into your head.

I didn’t go too far into the video before I clicked the button to learn more about this opportunity.

Surprise! Easy Clone System is just a funnel for Digital Altitude’s core product Aspire. I did a review of Digital Altitude back when I first came across it from the 3K Payday System funnel.

It’s actually not a review because I didn’t buy Aspire. Instead it’s what I think about these types of systems (there’s a few of them that came before this one).

So there’s really no need to do a review on Easy Clone System because it’s not even a product but you can definitely read what I think about Aspire, the product you’ll end up with if you take Alan’s Easy Clone System offer.

What I Think About Easy Clone System

To wrap this up, I’m going to tell you what I really think about this Easy Clone System offer.

Having reviewed products before by Alan Magliocca, the guy behind Easy Clone System, I can say that most of his previous offers were either scams or useless so I didn’t expect anything legit from him this time around.

When I saw in the JV announcement that he was releasing a product, my first impression was that this might be another one (you know what I mean).

One of his previous products that I reviewed is Banks Experiment which was released in October 2014 using a character called Ron Banks. That was useless.

From my experience, scammers seldom endorse anything valuable so it’s always good to do your research on anything they recommend. This is why I was so leery about this Easy Clone System when I saw Alan’s name.

Turns out that I was right and that’s a bad thing for Digital Altitude as well.

Alan Magliocca’s Easy Clone System is just a front for Digital Altitude and if you read my article about it, you’ll realize that this isn’t something that you want to get involved with.

It might be tempting to jump right in because it’s only a dollar but once you start going beyond that $1, things might get a little messy for you. Don’t do it.