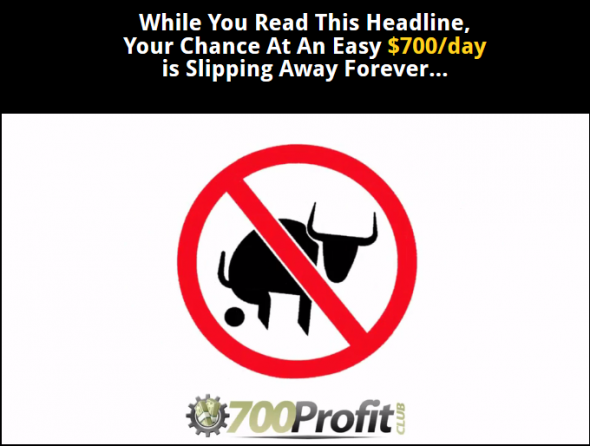 While you’re reading this review, your chance at an easy $700/day is slipping away forever…

Or so the people who created the 700 Profit Club wants you to think.

I got word about 700 Profit Club about 2 days ago through an email from Steve at 12 Minute Payday.  I knew that it was going to be crap but I checked it out anyway.

The video on the 700 Profit Club page looked somewhat like the 12 Minute Payday video but had a woman presenting.

Within the first 5 seconds of landing on that site, I already knew that this was something I wasn’t going to like. And I was right.

In this review of 700 Profit Club, I’ll tell you why this is definitely a scam and why you’re not going to be making $700 per day with this by tomorrow morning.

I’ve seen this exact script before. Everything the lady in the video is saying is from an old sales letter that has been used over and over again by different programs trying to run the same scam.

The first time I saw it in action was for Automated Cash Cloud which I reviewed almost 3 years ago. I’m going to take a wild guess that Automated Cash Cloud doesn’t exist anymore but if you read the review, you’ll see that I point out some things on there that you’ll find in the 700 Profit Club video.

There are some minor differences though but it’s things like changing the name of the “new sensation sweeping the internet”, changing the number of people being accepted and so on.

The same scam with the same script popped up about 6 months after Automated Cash Cloud was released but the name was then changed to Xtreme Profit Cloud.

Some other sites that used this “free website” scam were:

The way the scam usually works is that the scammer appears as though he/she wants to help you make money online by giving a small number of people a chance to partner with him/her.

They use disarming language to manipulate you and gain your trust, telling you things like how they’re fed up of all the gurus with their “BS sales pitches, phony actors and false promises”.

They’ll tell you to put away your credit card because they’re giving you something for free and they don’t want your money.

However, they’ll give you a “free” website which you’ll need to host somewhere. This somewhere is usually their preferred  web hosting company which you will have to pay for.

The scammer has already partnered with the web hosting company and every time someone buys a web hosting through the offer, the scammer gets a commission of anywhere from $50 – $200 per sale.

I knew about this scam before but if you’re new to the world of making money online, then you might not know what to look for.

There are red flags all over the video and a lot of what is said are total lies.

Allow me to point out some of what’s wrong with the 700 Profit Club video.

700 Profit Club claims they’re accepting 15 people per day for 30 days. This is a lie. The truth is that there is no cap on how many people can join. After all they want to make as much money as they can from people who would believe their lies.

You will always find that they have space available even if you come back tomorrow. Which leads me to the next point.

This (as well as the first point) is just a scarcity tactic they’re using to make you jump in quick without thinking too much about it. Think too much and you could end up losing your space.

Check back tomorrow, or next week, and you’ll find the same video with the same message about today being the final day.

No one can guarantee that you’ll make money online at certainly not a specific figure like $700/day. Especially when they’re doing everything for you and you hardly have any input.

If life was that easy, I probably wouldn’t be typing this review right now.

This is another tactic to make you feel special for being included or for qualifying. More than likely, if you’re reading this you’re probably not from Albania, Nepal or Cuba.

At one point in the video, a number of students who apparently were accepted into the club for free over the past 29 days are shown alongside how much they earned. 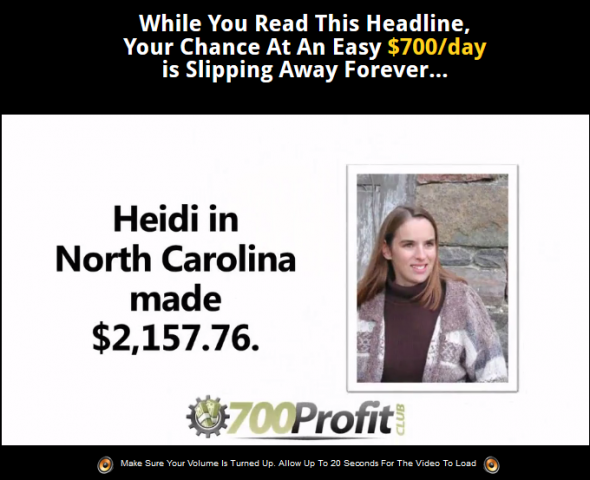 I am sure that the lady pictured here isn’t “Heidi from North Carolina” and she probably doesn’t even know about 700 Profit Club. In any case, this (and all the others) is totally made up because there is no way that this system makes any money at all.

More lies. If you believe this you’ll get sucked into this so fast, you won’t bother to read this review. The way the system works as explained by the presenter, you cannot make money with 700 Profit Club, much less that fast.

This is by far my favorite part of the video. Disarming language again. Seriously, you should be skeptical but they’re trying to use your skepticism as a ploy to get you to trust them.

There are a lot of lies and deceit in the video. It’s easy for me to spot them all because I’ve been making money online since 2006 and have come across lots and lots of “make money scams”.

One of the biggest lies told in this video though is about how the system works to make you money. Something called Coolhandle. Here’s the scoop on this Coolhandle thing.

CoolHandle – The Magic Behind 700 Profit Club

When explaining how people are able to make $700 or more everyday with the 700 Profit Club, our deceitful presenter says that she makes all her money by “tapping into something called Coolhandle”.

She continues that Coolhandle is a “new sensation sweeping the internet” and how this is a “totally brand new, totally automated way to make money from the internet”.

So what is this Coolhandle thing that works like magic to make you loads of cash? 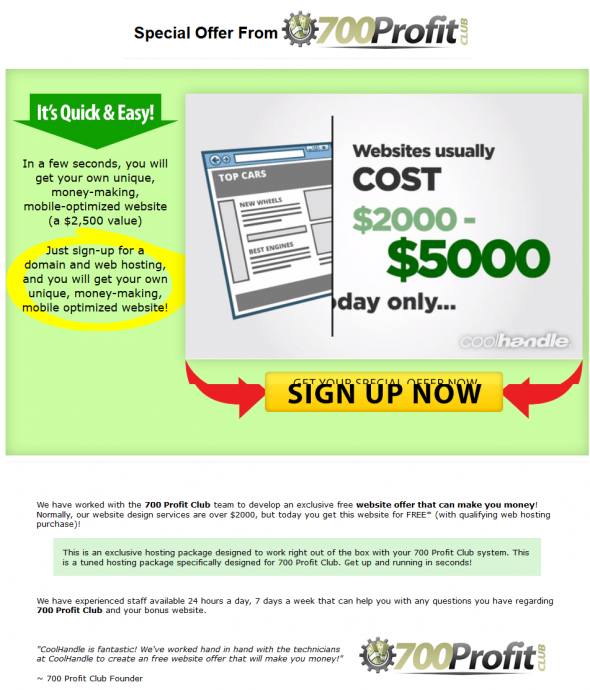 When you fill in your email on 700 Profit Club and click the button, you’ll be taken to a second page and then you’ll see the page above.

This is where you sign up for a domain name and web hosting before you get your free websites set up.

The thing about Coolhandle is that you’ll have to pay more money than most web hosting companies to host your website.

To be honest, I think Coolhandle only exists so that scammers could send them some business. I would never recommend Coolhandle as a quality web hosting service.

One last thing I want to say regarding Coolhandle is that if you don’t know how to make money online, you should not start off by getting web hosting. This is skipping the first step which 700 Profit Club is not going to teach you.

Making money online the right way means not getting scammed. You start with the first step and gradually build a business that will make you money for years to come.

It’s not some fast, overnight success plan that is built around a magic button.

There is a process (usually 4 steps).

I’ve used this 4 step process to earn a full time income from home and I know others who do the same. There are some that have even used this process to become millionaires.

But they didn’t do it overnight and they worked hard (just as they would with any other business).

700 Profit Club isn’t going to show you this 4 step process. They claim that they’re going to do it for you. However, once you get your free website from them, you’re on your own and I’m 100% positive that unless you actively put in work on that website, you’re not going to earn anything at all.

No one teaches this 4 step process better than Wealthy Affiliate, a community that I belong to that teaches you how to make money online.

Their make money training is task based and easy to follow and implement and they give you all the tools including web hosting for your websites. You can join for free and get two free websites to build your business with.

To show the drastic difference between 700 Profit Club and Wealthy Affiliate, here’s a comparison chart that shows some of the most important features you’ll need to succeed.

See how 700 Profit Club fails when compared to a legitimate community? 700 Profit Club is just another tired, old scam looking to take your money and leave you with nothing but the illusion that you’ve gotten something of value when the truth is that you got nothing that works and you’re none the wiser.

Please share your experience with 700 Profit Club and Coolhandle in the comments below so that others can benefit from the information.