Hide Search
You are here: Home / AM Product Reviews / AZ Formula Review – Can You Really Make $2000/Day With This? 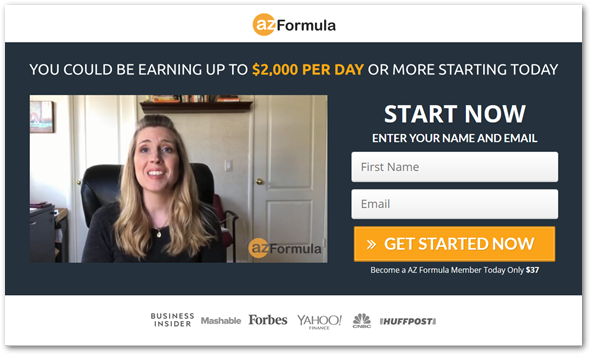 In the video for AZ Formula, Steven Cook describes himself as the “read deal”, distancing himself from shady gurus who trick people into buying scam products that will not help them to make money online.

If I wanted to make $2000 per day type of income, I’d want to learn from the real deal too.

But should we trust Steven Cook? Is he actually the real deal?

Is AZ Formula, which Cook says is something people have never seen before, the answer to financial freedom?

In this AZ Formula review, all questions will be answered and AZ Formula will either be branded a scam or recommended as a must have product for earning online.

What Is AZ Formula All About?

Name: AZ Formula
Website: azformula.co
Creator: “Steven Cook”
Cost: $37 (plus upsells)
Years Online: Since July 2018
Verdict: Not recommended. Too many lies and tricks to sell a $37 training which they don’t even give any details about. You do not know what you’re getting.

I didn’t bother purchasing AZ Formula and that is because after watching the video presentation, I still didn’t know what it was about.

Sure there are hints and clues that it was most likely something to do with eCommerce and selling on Amazon but the presenter made little effort to talk about what you were really getting and how it would help you make money online.

In an uncut version of the presentation which I found on YouTube, I saw a portion of the video where a woman is showing her Amazon Seller account so this must be something that shows you how to make money selling products on Amazon.

When the presenter starts off saying though that this was a done-for-you affiliate system though, you can’t help but be unsure and doubtful.

It’s a bad thing when they presentation doesn’t even try to tell you what you’ll be buying and I’ll never buy a product where I don’t know what I’m getting (who would?) so I didn’t get this.

Besides not knowing, there were many red flags, lies and unethical marketing that just told me to stay away from this.

Here are some of the ones that stood out the most.

Who Is Steven Cook? 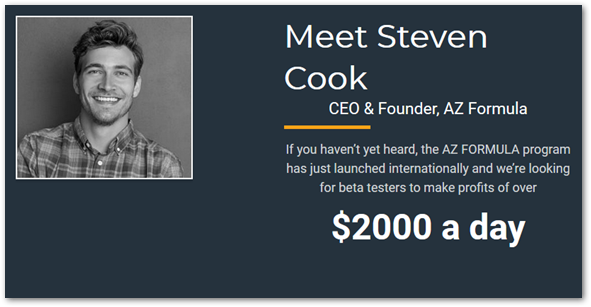 CEO & Founder of AZ Formula, Steven Cook says he’s the real deal but after doing a reverse image search on Google, it looks like Steven Cook does not even exist.

Steven Cook is just a made up character cooked up by some unethical marketer that is being used to sell AZ Formula.

A Google search reveals that the image above of Steven Cook, who doesn’t even appear in the video, is most likely a stock photo. Hundreds of websites have used this image for some reason or the other. 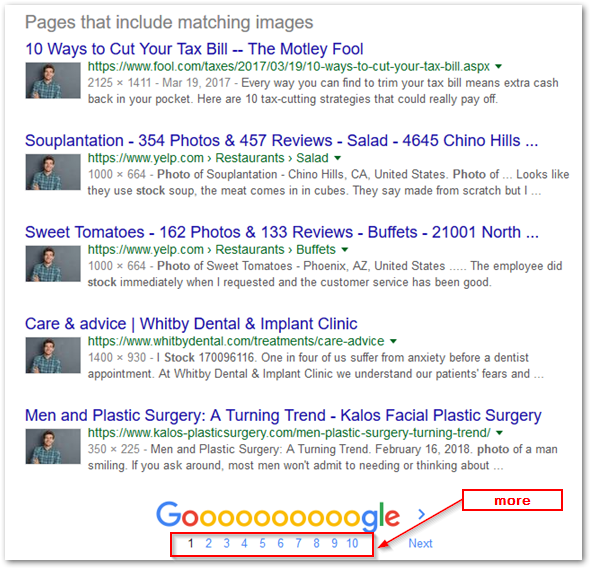 Now if Steven Cook was real, he wouldn’t have to use a stock photo and even if the stock photo was of Steven Cook, why would he use this one to represent himself for his new product?

I’ve seen this hundreds of times before while reviewing offers just like AZ Formula. The real owner doesn’t want to risk his reputation so he hides behind a character he created.

If AZ Formula was a quality product and could offer any value then there would be no need for such shenanigans.

This revelation that Steven Cook doesn’t exist negates his sob story (which is just a script I’ve actually heard before in some form) and exposes other lies mentioned throughout the video presentation (such as the bank account screenshots).

Another red flag that came up during my viewing of the AZ Formula video was when I recognized two people giving testimonials about how Steven’s program changed their lives.

I recognized these two people because they had given testimonials for other programs as well.

Here is one guy who I recognized from another program I reviewed called Kindle Sniper. 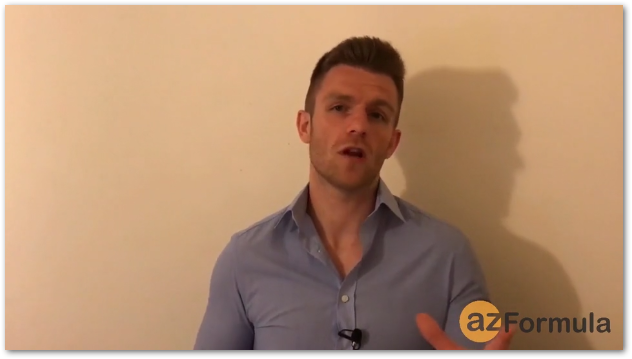 Well, he didn’t actually make any money by using the AZ Formula. The people behind the AZ Formula paid him to say some nice stuff about their product and that he made a lot of money with it.

Here is the Fiverr page where he goes by ‘robspence‘ and anyone can pay for his services which start from $5. 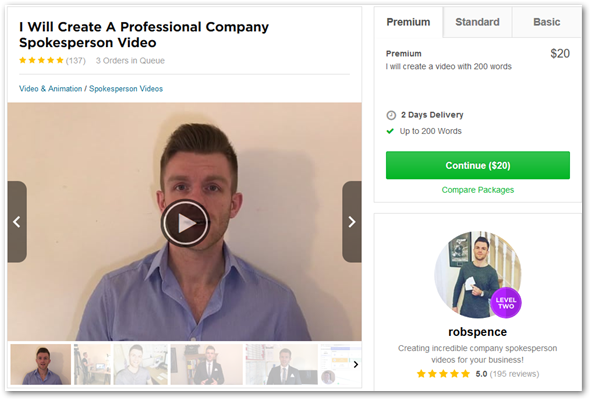 And then there is this lady who I recognize from another scam program I reviewed a long time ago. I can’t recall which program though but I know that she is also on Fiverr and she was also paid to do this testimonial. 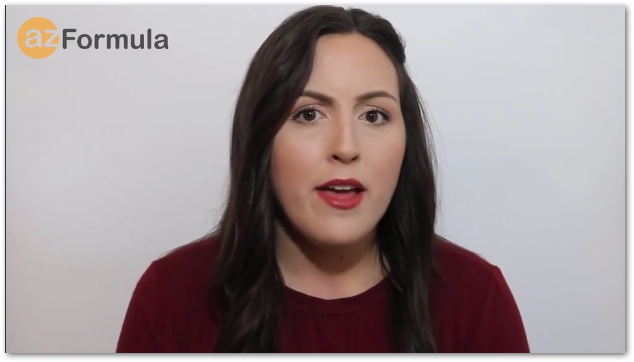 She didn’t make one dime using the AZ Formula so here we go with the lies again.

Another thing I had problems with was the way the presenter kept talking about his students making big money only working 15 minutes a day or hardly doing anything.

And all of this without any type of experience or training. Remember that this is a done-for-you system as they’ve said.

So the creators of AZ Formula do all the work for you and you just click a few buttons and sit back and make $2000 a day in no time at all.

Here is the thing. The people who really make money selling on Amazon, they have had to work very hard to get to that point.

They didn’t start out and then a couple of days after started making $2000 per day.

And it’s not because they didn’t have this magical system. It’s because it naturally takes time in this sort of business to make that kind of money.

You have to source products, wait for those products to get to Amazon’s warehouses, you have to promote your business and sometimes you don’t always win with the first products right off the bat.

And it takes more than just 15 minutes a day. You have to know what you’re doing too.

There are training courses that sell for over $1000 for people to learn how to do this and they’ll tell you that it takes a lot of work and time.

If a presentation is telling you that you can make all this money with no experience and very little time invested, they’re probably lying to you.

What Are They Selling?

They never actually say as I’ve pointed out before but they do hint that it’s an eCommerce program.

But what they’re really selling is a dream. They focus so much on what your life could be and how much money you could make.

We all want to have the kind of results being mentioned in the video. But you have to be sure that people aren’t just trying to take advantage of this need just to sell you their crappy product.

Near the end of the video, Cook mentions that he’s only taking 10 new members a day only.

I’ve also seen this trick being used on may scam products before.

It is a scarcity/urgency ploy designed to get you clicking on that order button before you miss out on a good thing. They also don’t want you to waste your time on researching reviews before you spend your money.

I know for a fact that the 10 new members a day thing is a lie. These guys want as many people as they can get to spend $37 (and more) on their product and they’re not going to shut down the order page daily to limit 10 people.

Usually when you see this strip on a website where they mention names like Business Insider, Forbes and other big sites, it’s because their product or services have been featured on that big site.

For example, Fiverr has one of these strips and they’ve really been featured on Forbes, The Today Show and other big name sites because their microgig services was something people were talking about back when they started.

But has AZ Formula been featured on Forbes, Mashable and CNBC?

I tried looking up any mention of AZ Formula on those sites and couldn’t find anything.

AZ Formula is quite new and they’ve never been mentioned on Forbes. So they’re lying again on media attention they’ve received.

The reason they put this there is because we tend to put more trust in stuff that has been mentioned by trustworthy sites like Forbes. Steven Cook wants you to trust the AZ Formula but how will he get anyone to do that if he is lying about everything.

Should you buy AZ Formula? Can it help you make money online?

In my opinion, this is a scam because they’re selling something that is not going to give you the advertised results.

Then they’re using too many shady tactics to get you to purchase this mysterious system unlike anything you’ve ever seen before.

The good thing is that this is a Clickbank product and if you do buy it, you can always contact Clickbank (their payment processor) and ask them to refund you. As long as you do this within 60 days of your purchase, you will receive a prompt no-questions-asked refund.

You can make money with eCommerce and selling on Amazon but you need a great course if you’ve never tried to do so before.

You also need to realize that you have to invest your time and effort into growing any business before it becomes more-or-less something that will run with less input.

My favorite way to make money online though is affiliate marketing. You won’t need to create or source products and all you need is time, a computer and an internet connection. Training is also necessary if you’re just getting started.

My favorite training program for affiliate marketing and internet business is a site I’ve been a member of for over 10 years.

They’ve helped thousands of people make money online and provide the best training and tools in one place than any other program.

Some of the things that make this program great is it’s community, support as you learn and the fact that they’re always adding new stuff and updating the site. They are truly interested in members success rather than trying to make a quick buck.

You can read a review of this site here and joining is quick and free. Check it out.

What are your thoughts on AZ Formula? Did this review help you in deciding whether or not to get their product? Tell me what you think in the comments below.